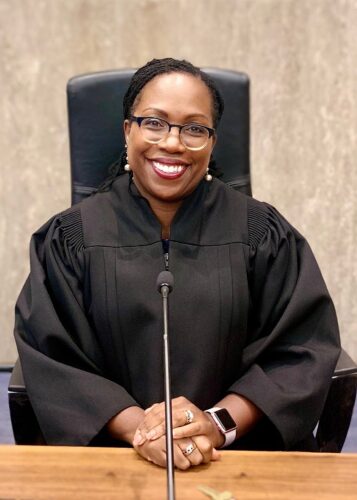 The Honorable Judge Ketanji Brown Jackson sat with absolute dignity, grace, humility, and decorum during the publicly televised hearings held in front of the Senate Judiciary Committee last week. Judge Jackson’s historic nomination to the Supreme Court of the United States stands as the first time a Black woman has ever been nominated to the highest court in the land. It is a nomination for which she was fully prepared to face the rigor of difficult questions and to stand on her record and experience. Judge Jackson’s education, qualifications, and experience prepared her beyond the level of almost any other sitting justice on the current court. However, no matter how qualified or how unquestionable her integrity, she was subjected to vicious attacks, outrageous and irrelevant questioning designed to embarrass and humiliate rather than illuminate or inform. The hearing took on a dystopian circus like “feeding frenzy” that was highly partisan and hyper-political. Despite her respectability and absolute right to be the nominee of the President of the United States, Judge Jackson had to be displayed in the public square and subjected to the disrespect, assault, and violence of the symbolic “whipping post” created by ordinary mediocre white men with their racist misogynistic white grievance politics in an outrageous display! Nevertheless  #Blackexcellence will win. We’ve persevered for over 400 years!

“In Virginia whipping was the most common form of punishment for both slaves and free blacks. Public whipping was used as a form of terror and tended to keep slaves in their place. Their backs would be exposed, and they would receive a set number of lashes. Anywhere from twenty-five to several hundred.”

The history of the “whipping post” to punish, terrorize and demonstrate control and dominance over black bodies was used to keep others (enslaved people) from following the “unruly” ways inherent in a people resisting the inhumanity of slavery and being bound as human chattel. It was an attempt to beat them down with physical and psychological violence so that no others would aspire to freedom of mind, body, and spirit. The system was supposed to keep the enslaved separated from liberation and independence while intimidating all the onlookers to “stay in their place” or they too would be put on display and beaten down into submission or even death. That was what the “whipping post” was designed to do. It failed. There has always been a massive resistance to the capture, binding, oppression, and enslavement of black bodies. Black people have been resisting all forms of oppression and claiming our own freedom and liberation forever.

The contemporary display of what was an antebellum practice of another era on the floor of the Senate Judiciary Committee confirmation hearings for Judge Kentanji Brown Jackson last week will also fail. She will persevere and be confirmed as the first Black woman to serve a life-time appointment on the Supreme Court. These so-called defenders of the U.S. Constitution and professed “lovers of liberty” whose efforts to upend this highly qualified, dignified, and historic candidate’s nomination to the high court was transparently tainted with

racists “dog whistle politics” and misogynoir attacks that denigrated the hearing process and shamed the nation. Through it all Judge Jackson demonstrated the resilience, fortitude, and grace that Black women continue to display in the face of every barrier and negative word or deed designed to intimidate us into minimizing ourselves. Instead, we continue to courageously step into the places and spaces where we have never been given access. Judge Jackson, once confirmed to the Supreme Court, will continue that legacy, and empower others to do the same.

Join us for Dinner