A tribute to all military veterans who have served in the U.S. Armed Forces 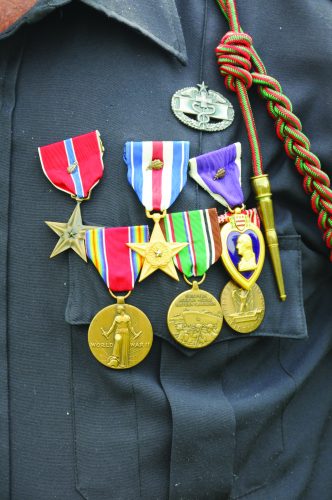 Your beloved serviceman or servicewoman is likely humble about the medals they were awarded during their careers.

When you’re sitting around the table this holiday season, be sure you’re up to speed on the various military medals and what they represent. You can make a big difference during the holidays by showing that you appreciate and understand the sacrifices your favorite veterans have made in their careers.

One way to do so is learning more about medals, including the Medal of Honor and The Purple Heart.

Here are some of the most impressive medals a military member can receive and what it means to earn one, as reported by the Pearl Harbor Visitors Bureau.

Regarded as the highest military decoration to be awarded by our government, the Medal of Honor is presented by the president of the United States and recognizes a service member’s gallantry and intrepidity for their risk of life while engaging an enemy force.

The first medal was introduced in 1861 as an award for the United States Navy. The Army followed with their own award the following year, and the Air Force Medal of Honor was adopted in 1965.

There are three distinct versions of the award used to represent the different branches of military – one for the Army, another for the Air Force, and one shared by the Navy, Marine Corps and the Coast Guard.

The Purple Heart medal is typically given to soldiers who were wounded in combat. Eligible service men and women have served in the military on or after April 5, 1917 when the United States joined the Allied forces in World War I. It is also common for families of fallen troops to receive the award on behalf of their soldier’s ultimate sacrifice.

Introduced on Jan. 2, 1918, the Distinguished Service Cross is awarded to soldiers who engaged in conflict with forces that threaten the United States. Here are three of the most common.

Navy Cross: Most likely awarded to servicemen and servicewomen who were present during the Pearl Harbor attack. Congress created the medal on Feb. 4, 1918.

Air Force Cross: Established on July 6, 1960, has been awarded to more than 190 Air Force members for their service.

Silver Star: The third-highest honor awarded to military members recognizes a soldier’s level of bravery. It was introduced in 1932 and used to replace the Citation Star which was created by Congress in 1918.