Contributed by City of Richmond 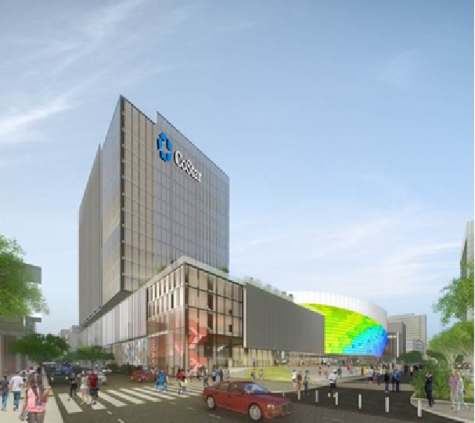 In a press conference today, Mayor Stoney announced a series of enhancements made to the Navy Hill project agreement, including the intention of CoStar to bring 2,000 well-paying jobs to the neighborhood.

“This interest from a NASDAQ 100 company that already has a strong presence in our city shows that with Navy Hill, Richmond can increase our tax base and bring new jobs downtown,” said Mayor Stoney. “Richmond can be competitive.”

CoStar announced in 2016 that it would headquarter its primary operations center in Richmond. The compact has infused more than $250 million into the local economy from its riverfront location at 501 South 5th Street. The company employs approximately 4,000 people worldwide.

“The Navy Hill development delivers everything a company like CoStar is looking for – access to transit, entertainment, conferencing, and new multi-family residential housing, all in a walkable and vibrant neighborhood,” said Andrew Florance, Founder and Chief Executive Officer of CoStar Group. “Without the Navy Hill development as a complete-package option – we would not be talking about significantly expanding our commitment to the city of Richmond, a place where we already employ nearly 1,000 people. Richmond has so much to offer, which is why we would like to keep growing with it, providing competitive careers and compensation for residents in the process.

“Our employees have investigative, insightful minds and they think long-term. We do too. With Navy Hill, we’re able to plan not only for the growth that the company will experience in the near term – but also what the company can do 10 years from now. We’re eager to see this proposal move forward, and even more excited to potentially deepen our commitment to Richmond.”

“CoStar’s exciting announcement that Navy Hill could be home to 2,000 new employees and a 400,000 square foot office building is exactly what Navy Hill was designed to do,” said Thomas F. Farrell II, Chairman of The NH Foundation Board of Directors. “With City Council approval, we can revitalize our downtown, improve economic opportunity, and make Richmond the place for innovative companies and their employees to grow, thrive and live.

“Additionally, we have been listening to residents and are working hard to address their concerns by shrinking the size of the increment financing area, building more affordable housing units in the project area, and providing the City with more revenue, more quickly. We look forward to continuing our work with Council to deliver the best project for the City, taxpayers and residents.”

“I’ve always spoken about the transformational opportunity that the Navy Hill project embodies,” said Mayor Levar Stoney. “This is further proof that our downtown redevelopment isn’t just about buildings. It’s about the economic empowerment of thousands of Richmonders.”

In addition to CoStar’s promise to bring 2,000 jobs as a tenant of the proposed project, the Mayor’s also announced developments in the size of the increment finance area, the proposed transit center and affordable housing.

House Bill 1345, introduced by Delegate Jeff Bourne, would allow Richmond to use a portion of the state sales tax revenues in the project area to pay down the debt on the new arena. If it passes, the bill will allow the administration to reduce the size of the increment finance area by more than half.

Working with the Better Housing Coalition, the Navy Hill Development Corporation has identified two opportunities within the project area to build units for residents between 40 and 60 percent annual median income. With the addition of those two sites, the proposal meets the 15% affordable housing threshold that Councilwoman Ellen Robertson and Richmond City Council requested in 2018.

The Mayor also announced that NHDC and GRTC are studying two options for the location of the proposed GRTC transit center – the original 9th street location and an additional site on Broad Street. “We want GRTC to have the opportunity to kick the tires on these options and advise us on what works best for GRTC and our residents,” said Mayor Stoney.

“The Unity Ride” links the past through freedom and friendship