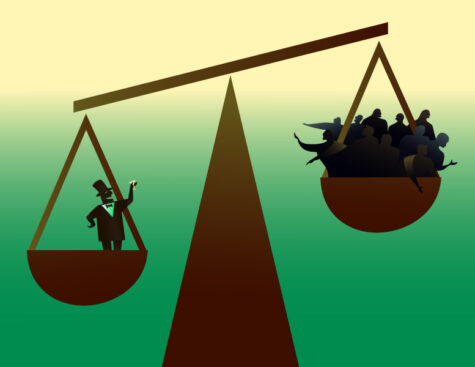 The minority is the smaller number or part, a number that is less than half of the whole number. A democratic system of government is one in which the control or decision making depends on the majority of its members. These are the definitions and distinctions between minority and majority. The United States of America is a Republic. We are a nation in which supreme power is held by “we the people” and our elected representatives, a nation in which we have an elected or nominated a president rather than a monarch.  This is how the governance of our nation is supposed to function. The will of the people is supposed to be the guiding light for those we have elected to represent us. In a democracy, the majority is supposed to rule. And yet, right now our country is being held hostage by an elite few. One might even say it’s a “super minority.”

Most Americans, regardless of their party affiliation, want CHANGE and Reform on how our nation engages with what can only be described as a “culture of gun violence.” When the leading cause of death among our children is now determined to be gun violence, most Americans agree that something MUST change. When there are more guns in America than people and America’s epidemic of gun violence is what now makes America “exceptional” to the rest of the world, something MUST change. However, no matter how loud the outcry from the majority of citizens, our system of government is in the vice grip of a small minority holding America hostage to its interpretation of “the 2nd amendment right to bear arms” enshrined in our nation’s constitution. Originally written and passed by Congress in 1789, and ratified into law in 1791, the 2nd amendment to the U.S. Constitution is a sacred right. In  2008, the SCOTUS handed down a decision that protected the individual’s right to own a gun inside the home; it also agreed that there are limitations to the 2nd amendment. Thereby, there are also constitutional restrictions on gun rights and gun ownership.

Back in the 18th century, men did not have access to military grade assault weapons with high-capacity magazines that were able to kill and maim hundreds of people in less than 30 seconds’ time. Those patriots carried weapons with a single shot and a musket that had to be reloaded each time it fired. And yet, there has been no reform or revision to an amendment that had very different consequences in 1791 than it has today. The idea that our government, whether national or local, doesn’t have the jurisdiction and the responsibility to regulate public safety is absurd.

The government regulates all kinds of things in our lives. The TSA makes us stand in line, go through x-ray equipment, unpack our bags for careful examination. We are not allowed to carry certain items onto airplanes and our personal privacy is highly scrutinized every time we choose to board. We must have a license to operate a motor vehicle, we must pay taxes and registration that are updated annually or semi-annually on that vehicle, and it must be insured if we want to legally operate it on public roads and highways. You cannot be licensed to drive until you pass both a written and practical driving test. If you want to rent a car you must be at least 25 years of age. If you want to consume alcohol, you must be 21 years of age. There are all kinds of rules and regulations imposed on us by our government in an effort to protect the public safety. However, with weapons of mass destruction because of the argument made for 2nd amendment rights, our government and public officials have been unable to or unwilling to do anything to effectively bring the surging out-of-control destruction and death caused by gun violence in America under control.

The will of the people (the MAJORITY) is being circumvented by a few Senators in the U.S. Congress. They have sold out to the Big

Business interests of the gun industry, and they are beholden to the BIG money invested in their own political interests by organizations like the NRA and major gun producers like Smith & Wesson. So, the representative government installed by “We the People” who “WE” have entrusted with public safety and our individual and collective pursuits of “Life, Liberty and Happiness” has been corrupted by a small minority of gun zealots more enamored with their love of guns than they are with their sworn duty to represent their constituents and protect the public safety. They MUST be replaced!

Savor the Flavors of Summer

Endorsement worth its weight in gold