The Power of WORDS 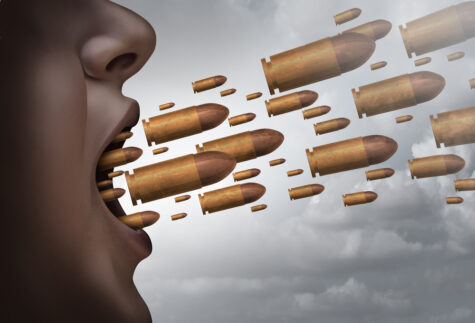 “Sticks and stones may break my bones, but words will never hurt me.” This was a cute little chant we used to sing when we were children to push back against the vile words used against us or the mean and nasty names that other children called us as we all struggled to grow up. It was intended to encourage us and to help us navigate our childhood bullies and counter the mean and denigrating ways in which people can attack and hurt other peoples for all kinds of reasons. But as we have grown into adulthood it has become clear that WORDS are so fundamentally important and that in fact the hurt and harm that words can do can be lethal. Words do matter, they may not be able to break your bones like “sticks and stones”, but they can incite violence and violent behavior that can possibly kill you.

The rhetoric used in Washington, DC on January 6, 2021, incited a mob of people to attack the U.S. Capitol with the intent to overturn a free and fair election. This attack caused tremendous harm, led to several deaths, and threatened the very foundation of our Democracy. The language used in the manifestos, philosophies, and articulated visions of white nationalism and white supremacy have inspired, condoned, and celebrated mass violence and destruction for generations. What happened in Buffalo, NY is only the latest manifestation of the hatred-driven dogma embedded in what these disciples call the “Great Replacement Theory” and those are the words and language used to justify their murderous mandate.  These white nationalists believe that all non-whites, Jewish people, LBGTQI+ folx, and non-White Anglo-Saxon Protestants need to be eliminated because they pose an inherent threat to the purity and continuance of the white race. Historically theses beliefs written and spoken have ignited the flames of white resentment, anti-Semitism, homophobia, xenophobia, and anti-Black racism. Not only do we have the contemporary acts of mass violence witnessed over the past several years in America, but we have many historic massacres that demonstrate how long this rhetoric has been inspiring murder and oppression.

American history, as taught in classrooms across America has historically and systemically attempted to erase the “bad stuff” from our history lessons. Why? Well, when we begin to examine our history as a nation, America has a lot to reckon with, particularly when we begin to interrogate this nation’s relationship to communities of color. Truth and “reconciliation” are not something this country wants to face. Could that be the reason that so many republican states and far-right political leaders are calling for the regulation of “how” we teach American history, and “what” we teach about American history? Your education is severely compromised if you don’t know about these (very few) examples of fear and hate.

All the above are a small sample across the decades. The massacres of Indigenous People go back before records were even being kept but here are two across several centuries:   the “Puritans” massacred hundreds of the Pequot Nation in Mystic, Connecticut in 1637, and the Sand Creek Massacre in Colorado in 1864 where the Cheyenne and Arapaho Tribes were attacked and many massacred by the U.S. Military after agreeing to a surrender. The Rock Springs Massacre in Wyoming is one where a mob of whites attacked Chinese workers in 1885, killing many and wounding many more.

There have been hundreds of years of racial violence in America, all rooted in a white nationalism and white supremacists’ ideology.

America has been built on this type of ideology and the words, rhetoric and beliefs that support it will never cease until the descendants
of white people stop denying responsibility and start impeding other white people from promoting it and teaching it systemically, institutionally, and politically. All these senseless killings and mass destruction were ignited by WORDS of hatred and false claims of supremacy and entitlement. The victims of this racial violence and death were attempting to live in freedom and liberty and stand in the dignity of their humanity and that is all.