The Patriarchy Must End 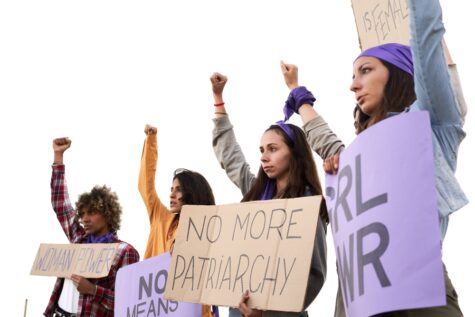 We do not force our children to hug someone they do not want to hug. We do not allow anyone to hug them who they do not want to hug them. We do not allow them to be touched in places they do not want to be touched; especially by people they do not want to touch them. If you make your children do any of these things, you need to re-examine yourself and your parenting skills. You must ask yourself, why you feel the need to force your will onto your child and teach them that they do not have any autonomy over their own body? While you are teaching them to submit their body to the will of someone else without their consent, you are simultaneously taking away from them the self-determination, personal freedom, and human dignity each human being is entitled to outright. This is what it’s like to take away a woman’s right to choose whether to carry a fertilized egg to the point it becomes a viable full-term baby; while also taking away her personal freedom, right to self-determination, and the human dignity of having autonomy over her own body. No individual should have control over another individual’s body, nor should government or any person representing the government or the state.

The Patriarchy is a system of society or government in which the father or eldest male is head of the family and descent is traced through the male line. Historically, women and girls have had no right to self-determination. Females were not allowed to own property or to vote. Their lives were determined, constructed, and managed by their male relatives, and in the case of enslaved women and girls, their owners. The 19th Amendment was passed in 1919 giving white women, free women, the right to vote and some agency to determine certain parts of their lives. Although “technically” Black men were given the right to vote in 1870 with the ratification of the 15th Amendment just after the Emancipation Proclamation freed all enslaved persons. Although truthfully, there was no clear and direct line to the ballot for these newly “liberated” Black men.  In fact, Black people have been being denied, threatened, intimidated, suppressed, and terrorized away from the ballot box since 1870 to the present day with voter suppression and the purging of the voter rolls in key and heavily Black districts. While “racial gerrymandering” has become a standardized tactic of GOP law makers, both locally and nationally.

The contentious culture in which we currently live, coupled with the entire nation being traumatized by a global pandemic that has killed over one million Americans since early 2020, has unleashed an extreme contingent of the right wing with a toxic and distorted version of conservatism. It appears to have overtaken the whole republican party. This extreme strain of republicanism is rooted squarely in white supremacy and the patriarchy. They have become more concerned with holding onto power than with leadership for the American people, and more interested in the “unborn” than they are with living breathing Americans, babies, mothers, and children living in poverty without food, housing, or adequate healthcare.

The male domination of women and women’s bodies must end. You cannot dominate and regulate what does not belong to you. We abolished the ownership of human beings in 1863. We hold these truths to be self-evident… we are all created equal.

Pregnancy begins with the male phallus, and if we need to regulate anything perhaps, we should begin there? Men have the responsibility

to regulate the part of their own bodies that initiates the fertilization process that can create the beginnings of a potential unborn human being. Women and girls don’t do that. It seems that the need for power and control (The Patriarchy) has created an atmosphere of distorted thinking around what decisions must be made by “THEM” regarding what women and girls are bound to do with their own bodies.

The Patriarchy Must End. You need to Take Care of your own business first.