Is Title IX REAL or Not?

Title IX states: No person in the United States shall, on the basis of sex, be excluded from participation in, be denied the benefits of, or be subjected to discrimination under any education program or activity receiving Federal financial assistance. 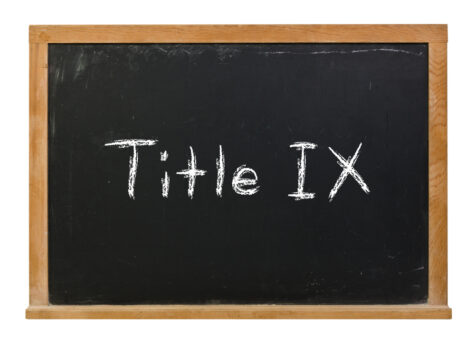 America is a nation in a struggle with its own ideals and foundational principles. As a country, the United States, since its inception, has strained to realize the declaration of itself as a nation of freedom, justice, and equality for All. We have always been at war with ourselves when it comes to who is included when we say “ALL”? Our foundational principles challenge both the perception and reality of who “We” are as “the People” of the United States of America. We want to be known as the beacon of Democracy and the “world’s best hope”. We want to be known as a place where anyone with hard work and determination can build a life for themselves and their family to live the “American Dream.” And yet, we are in a constant struggle with our own platitudes and proclamations because when it comes to equality, freedom, and justice, we are just not ready for ALL to mean ALL!

When considering what the law says in Title IX, that no person shall be excluded from participation or discriminated against on the basis of sex under ANY education program or activity receiving federal financial assistance, we are once again not ready for “no person” to mean just that. According to science and medicine, “sex” refers to the physical differences between people who are male, female, or intersex (see Planned Parenthood).  Intersex is a term used for a variety of situations in which a person is born with reproductive or sexual anatomy that doesn’t fit the boxes of “female” or “male.” Sometimes doctors do surgeries on intersex babies and children to make their bodies fit binary ideas of “male” or “female”. A person typically has their sex assigned at birth based on physiological characteristics, including their genitalia and chromosome composition. This assigned sex is called a person’s “natal sex.” On the other hand, gender involves how a person identifies. Unlike natal sex, gender is not made up of binary forms. Instead, gender is a broad spectrum. A person may identify at any point within this spectrum or outside of it entirely. Your biological or assigned sex does not always tell your complete story.

All the social and political upheaval around trans gender kids speaks directly to America’s inability to embrace its own foundational principles and platitudes around “Life , Liberty and the Pursuit of Happiness.” Once again, our ability to embrace what the law says rather than what individual people or people groups for purposes of religious beliefs or moral outrage want to “believe” about the law. The fact is, they want to circumvent or rewrite the law to fit their prescribed agenda which is to effectively discriminate against these kids and their families because of sex and/or gender identities.

In America, women are still not afforded equal pay for equal work. Black and brown Americans are routinely discriminated against in housing, education, finance, and the criminal justice system. Our national character and reputation as a place where freedom, justice, and equality are liberally distributed out to everyone is always coming into direct conflict with what “the freedom police” or the “vice squad” in the form of state legislatures and activist conservative governors deem as politically necessary or morally correct. We cannot serve both!

Either we are a nation made of laws created from principle devoid of personal, religious, or moral agendas or we are not.

Title IX clearly states that NO PERSON in the United States can be excluded from or denied the benefits of or subjected to discrimination under any educational activity or program receiving federal assistance. Period.  It seems the law is CLEAR. Obey the law or face the consequences. It really is that simple.

The Best Way to Shake off Jet Lag