The Color of War

“War I despise. ‘Cause it brings destruction to innocent lives. War means tears to thousands of mothers’ eyes when their sons go off to fight and lose their lives.” 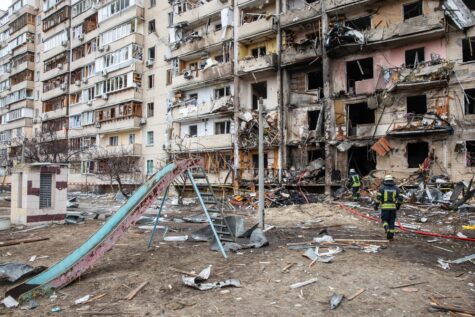 KYIV, UKRAINE – Feb. 25, 2022: War of Russia against Ukraine. A residential building damaged by an enemy aircraft in the Ukrainian capital Kyiv

The whole world is watching as an autocratic dictator pushes past the bounds of human decency and the rules of engagement to invade, bombard, and destroy entire towns, villages, and communities for no other purpose than the  conquest and domination of a sovereign nation. This is not new. Throughout human history there have been a multitude of these conquests made always with devastating consequences and massive destruction, displacement, and death. Ukraine is but the latest of these. In the 21st century alone, we have witnessed large- scale and ongoing conflict with the War in Afghanistan, Iraq, Libya, Syria, Yemen, and a global coalition united to fight Isis in the Middle East.

These large-scale conflicts in no way minimize the conflict and human suffering in other parts of the globe within the 21st century. Because several of the deadliest conflicts in this century have been fought in Africa with the Rwandan genocide and ethnic strife between the Hutu and Tutsi peoples contributing to the Second Congo War (called the Great War in Africa or Africa’s First World War) because of its scope and destruction.) The armies of nine countries and assorted militias devastated the lands and their people.  The nations of Angola, Namibia, Chad, Sudan, and Zimbabwe backed Kabila’s Congolese government forces, while troops from Burundi, Rwanda, and Uganda supported anti-Kabila rebels. Large sections of the Democratic Republic of the Congo (DRC) were stripped of resources as organized combat between professional armies gave way to massive violence, lawlessness and plunder and mass rapes were reported in the areas of conflict. An estimated 3 million people, mostly civilians, were killed in the fighting or died of disease, malnutrition, and starvation because of the conflict.

In 2011, as the “Arab Spring” swept through North Africa and the Middle East, people took to the streets in uprisings that challenged or overthrew authoritarian regimes in Libya, Tunisia, Egypt, and Yemen. However, in Syria its leader Bashar al-Assad (an ally of Vladimir Putin) responded to the uprisings by dropping “barrel bombs” (chemical weapons) on urban populations and rebel-controlled territories. Cease-fire agreements failed and the conflict continued. By 2015, it is estimated that 1 in 10 Syrians had been killed or wounded by the fighting. Over four million people fled the country and millions of others were displaced.

In 2003, the Darfur region of western Sudan, under the autocratic rule of Sudanese President Omar al-Bashir was challenged by a group of rebels. The conflict erupted into what has been called the 1st genocide of the 21st century. The targeted campaign of terrorism and ethnic cleansing against the civilian population of Darfur killed at least 300,000 people and displaced nearly three million. It wasn’t until 5 years later in 2008 that a joint United Nations and African Union peacekeeping force was able to restore some semblance of peace to the region. One year after that, the International Criminal Court (ICC) finally issued an arrest warrant for Bashir. This was the first time that the ICC sought the arrest of a sitting head of state charging him with war crimes and crimes against humanity. However, that investigation was suspended in December of 2014 because of a lack of cooperation from the UN Security Council.

The crisis in Ukraine is not unique. It is tragic and completely indefensible. However, it is intriguing how it has completely consumed the world’s attention throughout all media outlets and social media platforms 24/7. The outrage and overwhelming need to come to the aid and defense of the Ukrainian people has

been conspicuously focused on the distinction that Ukrainians are Europeans, middle-class, educated, and with means. They are not some third-world nation or poverty-stricken people. “Euphemistically” meaning they are white people and thereby somehow more worthy of rescuing? There have been multiple documented reports of Africans living in Ukraine being denied access to trains, buses, and transport away from the violence as if their humanity or trauma is somehow less important, or valuable than European or white refugees. The non-white nations of the world who are not tethered to Europe have been strangely silent regarding Ukraine. Although the consequences of war are the same across humanity…it does seem that “the Color of War” is REAL.