Holding on to Their Faith: Strengthening Black families living with Dementia

By B. Denise Hawkins 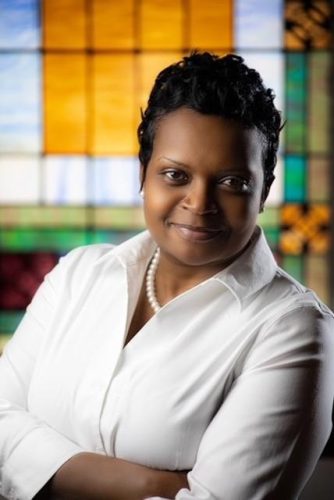 When Fayron Epps was growing up in New Orleans, Louisiana, worship services weren’t limited to Sundays. “I attended church every day of the week with my grandmother. That’s just how it was.” Inside those familiar four walls is where Epps recognized the power of the Black church.

For the community, it was a trusted source of information, she says. To the faithful, it was a haven and in hard times, a resource members relied on for spiritual, emotional, social, and material support. And for the sick, it was the place they sought for healing. Today, as an award-winning nurse-scientist at Emory University’s Nell Hodgson Woodruff School of Nursing in Atlanta, Georgia, Epps is tapping into one of the African American community’s cornerstones — the church to help improve the quality of life of Black families impacted by dementia.

Disrupted by the Data

She was a doctoral student conducting a review of the literature on dementia when she first realized that older African Americans are twice as likely as non-Hispanic whites to develop Alzheimer’s, a type of brain disease and a common form of dementia.

“I was shocked. I just couldn’t believe it,” recalls Epps who specializes in gerontology, the study of aging. “I had to do something,” says Epps, who, at the time, was like the rest of her family and community “who were raised and taught that Alzheimer’s,” the common form of dementia, was a disease that only white people developed. Armed with the science and data, Epps says she was determined to first educate herself and then help her family and those in her community in New Orleans to understand the truth about dementia’s disparate toll on African American families.

Although African Americans represent more than 20 percent of the 5.8 million Americans who have the disease, the statistics alone have not been enough to stoke widespread awareness, author Marita Golden observed in her 2017 Washington Post magazine story about African Americans and Alzheimer’s. In the piece, she notes, “Rarely were people aware of the stunning prognosis for African Americans. And how could they be? No major public health campaign has rallied interest and action.”

The presence of stigma and shame also pose challenges to increasing awareness and action, adds Epps.

Thinking back, around her family’s kitchen table, there were conversations about what ailed Black bodies: things like “hypertension, diabetes, cancer, and even HIV/AIDS, but the topic of dementia went unspoken,” remembers Epps. Then, like now, she adds, stigma and shame—experienced by those with dementia and their families—is responsible for much of the silence that Golden referenced.

“We [African Americans] are such a hush-hush community,” says Epps, who since 2017, has focused on breaking that silence. She is conducting faith-based research, education, and spreading dementia and brain health awareness in the African American community. Together with a team of staff and students, those efforts are housed under the umbrella Faith Village Research Lab, “because it takes a village.”

Faith in the Village

As a young girl, she says, “I saw a village model of care and support” in action. Across generations, households, and distances, “There were people caring for each other.” Many of them were like her aunt who counted it a “joy,” not a “burden” to rise before the sun and travel far to bathe and care for her infirmed grandmother. “I did the same when I took care of my paternal grandmother,” remembers Epps. “It was no problem. It was a joy.”

Caregivers, those living with dementia, educators, and faith and community leaders are among those who make up Epps’ advisory board—and village that keeps her informed “about what those in the community need” on their journey with dementia.

Today, she’s working on a few faith-based research projects that are funded by NIH, the Alzheimer’s Association, and other federal and private funders. They keep the nurse educator in the community and connected to Black families, who like her, have familiar and deep roots in the Black church. Central to that work are ways that African Americans living with dementia and their caregivers can draw on their own faith practices, spirituality, and religious beliefs to cope with an incurable disease that impacts them twice as much as other groups.

“I want to show how important religion and faith-based traditions are in the lives of Black families living with dementia,” says Epps of her research and work she calls “her ministry.” The literature,” she says, “supports the significance of religiosity as a protective factor to promote well-being for Black families facing dementia.” 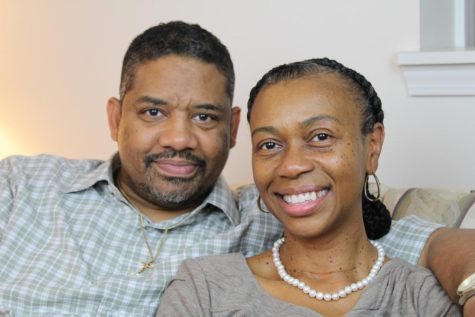 Photo courtesy Robert Reid
Kim and Robert Reid watched 10-minute, online church service tailored for people living with dementia and their caregivers. It’s been a way to keep families like them connected to a faith community.

But lesser known, she says, is research on “the worship experiences” of those Black families; something that she intends to expand.

It matters, Epps says, when a person’s identity is linked to their religion or place of worship. Over time, dementia robs a person living with the disease of not only their memory but also their identity.

That’s why “having a faith tradition and belonging to a faith community” can be restorative and serve as an anchor for people with dementia, explains Epps who is designing and testing the impact of in-person and online dementia-friendly worship services.

Before the COVID-19 outbreak shuttered many churches, Epps often accompanied the families and caregivers in her research study to Sunday morning church services at dementia-friendly churches. Like most researchers who worked in the field, she was soon forced to pivot when the pandemic started. Working with faith leaders, Epps and her team developed pilot online worship services for those unable to physically attend church. Church attendance often slumps and so does participation in church activities after a person receives a dementia diagnosis and as their disease progresses. Epps wanted a way to “offer a meaningful religious activity,” and to keep those living with dementia connected to a faith community, even if it was online.

Each of the online services is about 10 minutes long, have a central theme, offer live music and old, familiar hymns, a sermon, and on selected Sundays, communion may be celebrated—all features that have made worship convenient and enjoyable for 56-year-old Kim Reid who was diagnosed with early-onset Alzheimer’s at age 50. She and Robert Reid, her husband and care partner, enrolled in the study around the time their Georgia church ceased operating because of the pandemic and organizational changes.

“Church used to keep us busy from sunup to sundown,” says Robert Reid who served as a deacon and was active in other ministries. Since the church closure and his wife’s diagnosis, that pace has dwindled to home Bible Study on Wednesday evenings and Sunday online worship. And while they miss the fellowship of in-person services, Robert Reid said they are drawing on what Epps called their “religiosity” to cope.

Says Robert Reid: “The beautiful thing about the Word is that it is in us. We are able to pull on it for stability and comfort during everything we are going through.”

Epps’s Faith Village team went in search of Black churches and faith leaders who could collaborate on creating “culturally relevant programs to support African Americans living with dementia and their caregivers. They sought “trailblazers and churches that were ready to break the silence and commit to creating dementia-friendly and inclusive environments.”

It proved to be a tall order. “What I found working in the Black community were faith leaders who were unable to respond to the needs of families” living with dementia and those caring for them because they didn’t know how and didn’t understand the disease, says Epps. In a quick primer with those pastors, she says she describes dementia as “a big umbrella term for over 70 types of dementia, with vascular dementia being the one that African Americans develop the most.” Vascular dementia is the second most common type of dementia after Alzheimer’s. It’s caused by obstructions in blood flow to the brain.

But what may be the most impactful point in the conversation is when Epps reminds those faith leaders that those living with dementia and the people caring for them, are among the members sitting in their pews.

So, instead of a conversation here and a church lecture there, Epps created the Alter program. Its purpose is to educate and prepare Black faith communities that want to create welcoming and supportive places of worship for “anyone, regardless of their cognitive abilities,” according to a description on the program’s website. While the concept and practice of dementia-friendly places of worship is not new in the United States, Alter, “a nurse-led dementia collaborative,” is considered “the only program of its kind that engages African American congregations in supporting family caregivers and people living with dementia.”

Among Black families, the need for such a program was great, says Epps. “While conducting research with Black families living with dementia, I heard their stories. They felt the church, the one place they thought they could always count on, abandoned them. That’s when I said, let me talk to pastors to see what’s going on.”

One of the first she approached about her then idea, was her own pastor, Bishop Glenn B. Allen, who pastors Destiny Christian Center International in Fayetteville, Georgia. As he listened closely to Epps describe her long nursing practice that included caring for patients living with dementia and her research work on dementia at Emory, Bishop Allen says he realized that she was providing a snapshot of an uncle he knew as a child.

“We just thought he was crazy, back then, but I know now that he was going through dementia. We didn’t have a name for it or education about how to care for him,” recalls Bishop Allen. “If we did, maybe things would have been a lot different.” He and his church leaders are completing the two-year Alter program that launched in July 2019, in partnership with Georgia State University. Bishop Allen also is the pastor who leads the Faith Village online worship services.

For now, Black, urban and Christian describe the 14 Georgia churches enrolled in Alter, but an excited Epps says there is also growing interest from churches across the country. Alter provides churches who participate with a financial stipend.

Promoting dementia awareness and brain health among African Americans is work that Epps often calls “her purpose.” Looking forward, she says, “It is my hope and prayer that Black families will speak up and feel more comfortable seeking support from the church and vice versa—the church will feel more equipped and comfortable supporting families living with dementia.”

This is the first in an occasional series of stories by B. Denise Hawkins on aging and African Americans living with dementia. This article was written with the support of a journalism fellowship from The Gerontological Society of America, The Journalists Network on Generations and the John A. Hartford Foundation.

Where will your next lead gift come from?