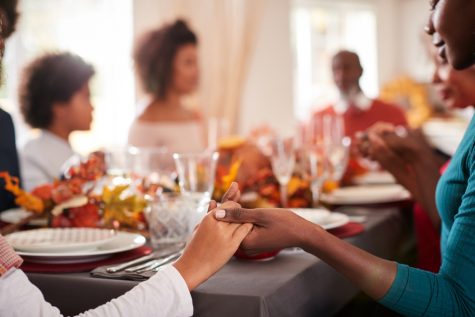 All over America there are schools and teachers who are still promoting the mythology of the “First Thanksgiving” to school children as if it were true. Still teaching that the Pilgrims and the Indians (although, some now use the names Native Americans or the Indigenous People) all gathered together to celebrate the harvest and give thanks over a hearty meal that involved a turkey and a cornucopia of fresh vegetables and fruits. It’s a “feel good” story that is based in fiction rather than in fact. And yet, in upholding this mythological tradition, teachers can avoid the discomfort that is sure to come when students begin to ask questions that delve much deeper into just how our country came to be founded.

And exactly what was the relationship between the Pilgrims and the Native Americans? Instead of answering those questions, youngsters continue to make dioramas depicting this strange and mythological relationship between white men and women with the Natives who first inhabited this land. The Thanksgiving story that is told to our school children is a fable and a false narrative. The truth is a problematic and traumatic history chronicling the attempted genocide and erasure of the Indigenous Peoples of the land we now call the United States of America. Today many Indigenous People remain traumatized not only by the truth of the “Thanksgiving Day” fable but the annual attempt to erase their history or completely deny it.

Of course, there is nothing inherently wrong about giving thanks on a particular day. In fact, it is always good to count your blessings and to cultivate an attitude of gratitude. “Giving Thanks” is something entirely different than the promotion of a culturally disingenuous narrative that supports a historic lie rather than recognizing The Truth of this nation’s history. Giving thanks has always been a tradition among Native tribes and groups as a part of their spiritual practice. However, Native peoples’ perspectives on the “First Thanksgiving” are certainly ones we all need to reckon with, as compared to the traditional narrative that portrays a “friendly harvest festival” where Pilgrims and faceless, nameless generic “Indians” began what would become one of our nation’s most beloved national traditions.

In Plymouth, Massachusetts, since 1970, the Wampanoag Tribe has declared Thanksgiving as a national day of mourning for the loss of Indigenous people’s lives, culture, and land. Each year they gather and proclaim the following:

”Our presence here is a stark reminder of the true story of Thanksgiving that differs so much from the fabled stories shared in classrooms, history books and celebrations across this nation. We will never forget the atrocities that fell upon our people as a result of their violent trespass. Well, we can’t change the past, but we can change the future. And the way we change the future is to educate people and start understanding that this is not a day [Thanksgiving] of celebration. This is a day of mourning.”

Let us be thankful that over 400 years later, the Indigenous Peoples of this United States of America are still here and able to raise their collective voices to proclaim that they are not conquered, they are not defeated, and that they are the Living History and Legacy of our national history. It is time that we ALL acknowledge and celebrate that truth. Let us be thankful that we are able to hear the truth and speak the truth. And when we know better ….we are responsible to DO Better. Let us all be thankful on this day of giving thanks for the life that we have and the ability to learn from our history in order that we might change our future.