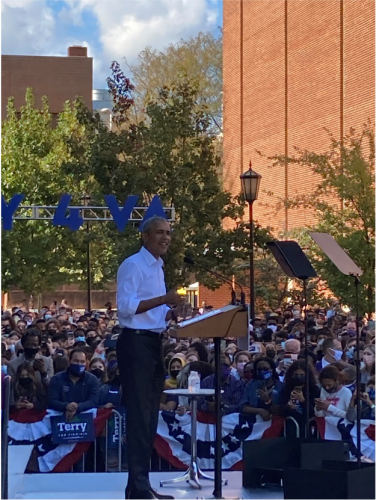 Former president Barack Obama was welcomed to a lively crowd at a rally for gubernatorial candidate Democrat Terry McAuliffe at Virginia Commonwealth University this past Saturday. Obama was the final speaker to a crowd of about 2,000, alongside others rallying for McAuliffe, including Richmond Mayor Levar Stoney, Gov. Ralph Northam and Senator Tim Kaine. Lieutenant Governor candidate Hala Ayala and Democratic National Committee Chair Jaime Harrison also were present.

In an opening speech, McAuliffe denounced his opponent Republican Glenn Youngkins views  and his companionship with Donald Trump: “Glenn Youngkin is not a reasonable Republican. Do we want a lapdog to Donald Trump to be our governor here in the commonwealth? No, we don’t.”

McAuliffe spoke about his plans to ensure women’s right to abortion, and the right for the lgbtq community to be able to marry.  He stressed the importance of the crowd actually turning out to vote by November 2nd: “You all know what’s at stake.”

With less than two weeks left to vote , roles up for grabs include governor, lieutenant governor, attorney general, all 100 members of the House of Delegates, and local offices, based on location.

One VCU student spoke of how voting is important not only regarding rights but also beliefs. “Voting lets what means the most to you come to fruition”, said Elizabeth, a sophomore at VCU.

Another VCU student, Joseph Mosby, a senior citizen who owns a crafts store in Northside but is taking classes for free as part of a program called the Senior Citizens Higher Education Program, was excited just to get a glimpse of Obama, but spoke of the importance of voting as “an opportunity to exercise citizenship”.

Barack Obama was the closing speaker for the event. He came out to a roaring applause and spoke highly of his friend and candidate McAuliffe: “I cannot be happier that Terry’s back on the ticket. He’s persuasive and I know he will make you proud as governor because he’s already done it”. He endorsed a multitude of Virginia legislative candidates.

Obama took time to discuss his time in office  as well. “I didn’t solve every problem when I was president. The fact is that it’s hard to undo the legacy of discrimination that goes back centuries.” He however looks forward to the future. “It’s hard in a big country like this, where people disagree a lot, to get everybody moving in the same direction, but here’s the thing, we can make it better.”

Many loud boos were heard when Obama began discussing opposing party Youngkin’s views. “You can’t run ads telling me you’re a regular old hoops-playing, dishwashing, fleece-wearing guy but quietly cultivate support from those who seek to tear down our democracy.” To which the former president replied a quote he has spoken before, “Don’t boo, vote. Booing doesn’t do anything”.

Obama stressed the importance of voting by mentioning a 106-year-old black woman he once met, who having lived through many years of injustices and horrors seen during the Civil Rights Movement, never missed a chance to vote and was able to send in a ballot for him when he ran in 2008. He used her as encouragement not only for others, but for himself. “I thought, if she’s not tired, I can’t be tired.”