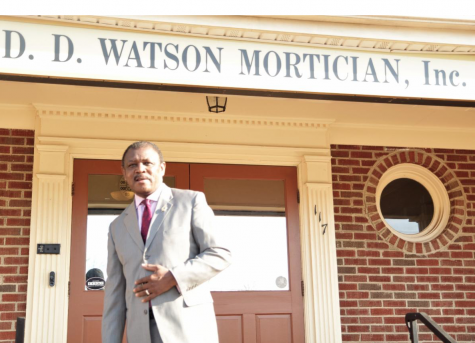 TriceEdneyWire.com – John E. Thomasson was a hero in his hometown. As a member of the board of supervisors in Louisa, Va., he was the county’s first African American elected to public office. He built a successful realty company. He helped to save mortgages and paid for college scholarships among other charitable giving. He also owned the local funeral home for 53 years, working and driving a car well into his 90s.

When he died of an age-related illness at the age of 98 on July 22, 2020, there was hardly anyone in the county of Louisa who had not been touched by his life. And other than his wife of more than 65 years, the Rev. Christine Thomasson (a respected community servant in her own right), there is likely no one who knows his impact better than his predecessor, D.D. Watson Jr.

Watson was handpicked by Mr. Thomasson to purchase and take over his funeral home business in 2004. By then, “Mr. T”, as Thomasson was fondly called by some, had overseen the burials of thousands of Virginians and was highly regarded for his works across the Commonwealth. Even the Virginia Senate, this year, issued a proclamation in his honor.

Yet, upon the death of this legendary businessman, philanthropist, politician, and public servant, the largest single gathering in his honor was barely 12 people. That’s because government-imposed legal restrictions on public gatherings due to the COVID-19 pandemic had robbed Mr. T of what – no doubt – would have been a “homegoing celebration” attended by thousands.

“If it wasn’t for the COVID virus, he would have had a service fitting for a king,” said Watson in a recent interview with the Trice Edney News Wire. “His impact was so far-reaching. But his life could not be celebrated like I thought should have been fitting for him. COVID stole that.”

It hasn’t been just the homegoing celebrations for community giants like Mr. Thomasson that COVID stole. More than a year since the World Health Organization confirmed the Coronavirus as a pandemic on March 11, 2020, Watson and others with close views of the most sacred of gatherings now see the diminishing homegoing ceremonies as possibly leading to a COVID-inspired culture change in the nation’s Black community.

Whereas funerals have long been a monumental “celebration of life” for African Americans, some believe this tradition has diminished forever even with a largely vaccinated community and regardless of how post-COVID America becomes.

“What it’s going to look like in my opinion is fewer and fewer people coming to celebrate your passing. It’s going to cause a nonchalant attitude about death…that’s my opinion.” says Watson. “A grandson who once would have made it home from California to be at Grandpa’s funeral, is now going to say, ‘Well, put it on Zoom. I can’t take off a day. Make it for 12 o’clock, which is 9 o’clock for me in California, and I’ll sit at my desk and I’ll watch the funeral.’… And so, it has made it unnecessary to come home to say your final goodbyes to Grandpa who raised you; nurtured you and gave you the opportunity to go to college.”

There will be reasons for this change beyond nonchalance, says Dr. Rahn K. Bailey, a forensics psychiatrist at the Charles Drew University School of Medicine in Los Angeles.

“I would certainly agree. I think that in a lot of ways, things have changed permanently,” says Bailey, recently appointed the next department head of psychiatry at Louisiana State University – the first Black physician to serve in that capacity. “Fear drives behavior,” Bailey explains.

Agreeing with Watson, he predicts that five years from now, people will still not have gone back to their pre-COVID traditions. “I think there will not only be a continuing fear of COVID, but fear of any other possible illnesses that they don’t know.”

This fear is being recognized across America as a possible culture changer. It is even being preached from the pulpits.

“When all of this is over, you may get over your virus, but you won’t get over your fear,” said Bishop Walter Scott Thomas Jr., a past president of the Hampton University Minister’s Conference, in a recent message to the Greater Mt. Calvary Holy Church, one of the largest Black congregations in Washington, D.C. “People are not going to get over being taught to be afraid for 12 months.”

Rev. Dr. Hari P. Close, II of Baltimore, president of the 2,000-member National Funeral Directors & Morticians Association, Inc., the association for Black funeral directors says the Black community must do everything possible to guard against losing the tradition of holding large funeral gatherings.

“A lot of our families have expressed that they can’t wait to go back to tradition because we actually celebrate people’s lives and your friends and families are part of that celebration of comfort to get through it,” he says. “As I said to my colleagues in the industry, we cannot allow our culture to be changed because once we let that segment dissolve of the celebration of life, we’re in trouble. And I’ve expressed to some of my White counterparts how important this celebration is in the African American community and the Hispanic community. We have a responsibility to the next generation to really emphasize the traditions of who we are.”

The Secret to Career Happiness