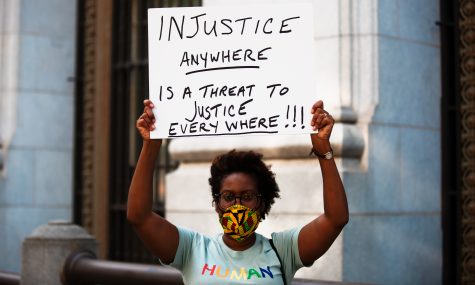 Anyone who has played the three-card monte, knows that it’s just a big set up to distract, deflect and ultimately, to detach you from your money. It’s a swindle and if you fall for it, you deserve to lose some cash, especially after you’ve been warned. The game is rigged, just like in the gambling industry, casinos, lotteries, and even bingo. Sure, there are some people who win, and even win big. But the fact is that most people lose and that’s what keeps the game going!

In the interrogation of the most recent tactics of denial, deflection and distraction in the struggle to address and fight white supremacy in this country, the new one is not that new. “What-about-ism” is a device used over and over again and unfortunately, we still cannot help falling into its vicious cycle of going nowhere fast. Given the current escalation in anti-Asian hate and violence in this country, what rises to distract us from the foundational principle upon which this hatred is built, is the repeating trope of pitting the Asian community against the Black community. The “model minority” versus the failure of “the Blacks” to learn how to “fit in!”

By elevating the instances of Black perpetrators of anti-Asian hatred, violence and bigotry to distorted levels of occurrence, we once again see the false narratives, false equivalencies and the deflection of blame. We see white supremacist constructs attempting to equate the instances of hatred and bigotry, by Black and brown perpetrators, in order to make “others” just as responsible for the “problem” as its principal arbiter. The biggest social, economic, systemic, institutional and national problem in America is its inability to effectively address white supremacy and its foundational and historic origins embedded into the cultural fabric of this nation. White Supremacism has infected every part of the American cultural continuum and has effectively impacted the lives and well-being of All Americans.

Divide and conquer is a military tactic, and it is extremely effective. Black and Asian communities have historically been allied in fighting racism and yet, right now there are forces that have been set into motion in an attempt to divide us and distract us from that fight just like in the three-card-monte card game. Power concedes nothing without a struggle and the struggle against the systemic practice, policy and procedure of white supremacy is real. It is a battle that we need all hands on deck in order to win. We cannot allow ourselves to be repeatedly upended by these endless and quite predictable patterns of distraction, deflection and denial that the “powers that be” continues to employ.

Do not get it twisted, ALL perpetrators of anti-Asian hatred and violence, regardless of their racial identity are odious and disgusting. All communities should stand in solidarity regarding that, without question. However, this persistent strategy to falsely claim that the Black community is at odds with or against the Asian community is clearly a slight of hand tactic to get us to begin fighting amongst ourselves instead of struggling together in solidarity to fight the foundational and structural power that has set all inequality, injustice, inequity and immorality into motion. These are the guardians, provocateurs, and soldiers

And Power is the prize, game, set and match! Power is what they do not want to give up and will fight to hold on to by any means necessary. That includes sowing seeds of division, distrust, and distraction. It’s priming us to continue to be the victims of the BIG Set Up. We cannot allow ourselves to be fooled into compliance with this all too predictable and often used tactic. Our very lives depend upon us, all of us, building solidarity in our collective struggle for life, liberty and justice for ALL.

How are fundraising goals set at your nonprofit? Where did these numbers come from?