A Woman in History 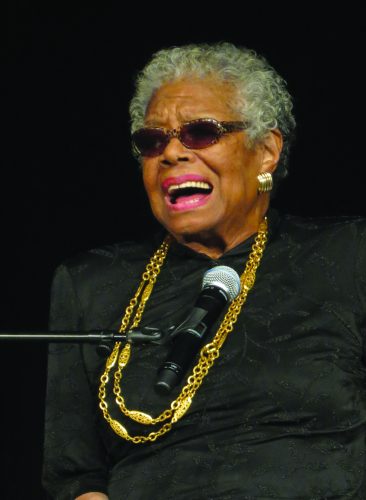 Maya Angelou, a Black poet, memoirist and civil rights activist, was born in 1928 in St. Louis.

She was sent at an early age to live with her paternal grandmother, Annie Henderson, in Stamps, Ark. After suffering sexual abuse in her mother’s household, Angelou became mute for almost five years. Cloaked in silence, Angelou developed an extraordinary memory, coupled with a love for books and an ability to listen and observe.

At 16, Angelou — then living with her mother and brother in Oakland, California — became the first Black female cable car conductor in San Francisco. Soon after, she gave birth to her son Clyde. In 1959, after a failed marriage and song-and-dance career, novelist John Oliver Killens urged Angelou to move to New York to concentrate on her writing. She did and met Black authors and was published for the first time. In 1960, she and Killens organized the Cabaret for Freedom to benefit the Southern Christian Leadership Conference and was named the SCLC northern coordinator.

She moved to Africa with South African freedom fighter Vusumzi Make in 1961, where she worked as an associate editor at The Arab Observer, an English newspaper. By 1962, her relationship with Make was over and she and her son lived in Accra, Ghana, where she was an administrator at the University of Ghana, a feature editor for The African Review and worked and performed in Ghana’s National Theatre. She became close friends with Malcolm X, and eventually returned to the U.S. in 1965 to help him form the Organization of Afro-American Unity. She was living in Watts during the 1965 riots and, devastated by the deaths of Martin Luther King Jr. and Malcolm X, she wrote. She produced and narrated “Blacks, Blues, Black!” a 10-art series of documentaries about the connection between blues music and Black heritage for the precursor of PBS. This work was followed by her first autobiography and one of her most famous works, “I Know Why the Caged Bird Sings,” published in 1969.

This was followed by work as a composer, screenplay writer, authoring short stories and documentaries and poems. Angelou was nominated for a Tony Award for 1973’s “Look Away” and appeared in “Roots” in 1977, chalking up more than 30 honorary degrees from universities around the world. She taught at Wake Forest University until 2011 and also lectured around the country, winning a Grammy, directing a feature film (“Down in the Delta”), even receiving the Presidential Medal of Freedom in 2011 from President Barack Obama.

Angelou died in 2014 at 86. Her papers were donated to the Schomburg Center for Research in Black Culture in Harlem.

Speak Well of Past Employers

The Women’s Business Center of Richmond

Best Jobs of the Future

VA Tax Holiday is back

The Power of Urgency