Protest is NOT insurrection 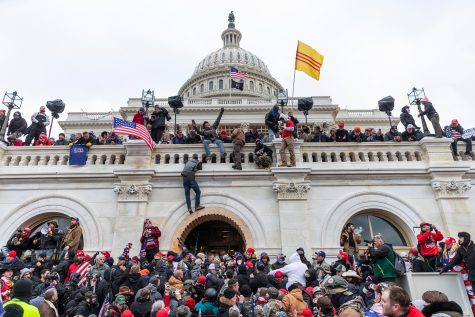 Was The Boston Tea Party a protest or an insurrection? Most Americans believe it was an act of protest.  Historically, it was seen as an act of rebellion because the colonists blocked off the docks and snuck on to the boats, loaded with the tea, dressed as Native Americans and then dumped the tea overboard. Demonstrating their defiance of British law and disdain for taxation without representation, they claimed that they would not pay taxes on the tea and destroyed the cargo by dumping it into the bay. They also implemented a boycott on British goods in protest.

There are many things with this characterization of The Boston Tea Party that are problematic. However, the first and most disturbing is the way the colonists attempted to cast the blame for breaking the law on the Indigenous people of America by dressing up in “red-face” minstrelsy to mask their own behavior. The destruction and theft would be blamed on the so-called “savage” nature of the American Indian. They recognized that the “criminalization” of Indian people would cause an immediate and disruptive response. This disruption was used as a tactic to activate other colonists who were, perhaps resistant to actively participate in the protest. Covering up their theft and destruction of property, while masquerading as Indians could also offer these colonists a shield from prosecution.

This is similar to the tactics “white women” have historically used when making false accusations of sexual assault or assertions of disrespect or impropriety against Black men. It is an immediate provocation for outrage and ignites a fervor and “righteous indignation” for the white community and specifically white males. In this case, the “purity of white womanhood” must be protected and uplifting the honor and dignity of “whiteness” that is being called into question by contrasting it with the brutish nature of Black males is and has always been a righteous cause for “a stand your ground” type of excuse. And therefore, it has often been cited as a defense for murder, justifiable violence, and destruction aimed at Black people and Black communities.

As we interrogate the events of January 6th, that have only just begun to receive the type of scrutiny needed to investigate just how high up and embedded within our government systems and institutions of law enforcement the organization of the march on the U.S. Capitol and the conspiracy to commit insurrection goes; we continue to see communities of color scapegoated and mischaracterized by media outlets, far right politicians, and pundits. This mischaracterization often takes the form of articulating false equivalencies and deflecting blame and accountability. For example, comparing the January 6th, 2021 insurrectionists to the May 30th, 2020 Black Lives Matter protestors in Lafayette Square following the public execution on May 25,2020 of George Floyd in Minneapolis, Minnesota by a white police officer and streamed live on Facebook. All of this comparison and equivocation, while the political discourse continues to simultaneously attempt to bundle Black Lives Matter together with the mostly white anarchists group called Antifa.

This adds fuel to the fire of the culture wars and the built-up white grievance politics that have been on full display in America for over a decade now.  All of this culminating in the monumental and historic event of an angry and inflamed mob of white nationalists, white supremacists and white supremacists’ sympathizers marching unleashed and weaponized to first, take over the U.S. Capitol, in order to stop the lawful and constitutionally mandated certification of legally cast votes of United States citizens in a fair and free democratic election. And second, to fundamentally overthrow the U.S. government to install their own choice as the appointed “Dear Leader” of this nation. That is an insurrection and an attempted coup. Further investigation might even determine that certain participants actually committed treasonous acts against our government, our nation and its people.

There is no comparison between ANY THING, any protest, gathering or articulated purpose for the Black Lives Matter Movement with what happened at the U.S. Capitol on January 6, 2021. The 1st Amendment of the Constitution gives us “… the right to peaceably assemble and to petition the Government for a redress of grievances.” Those people who invaded and desecrated the U.S. Capitol, caused death and bodily harm to over 140 police officers, were criminals not patriots. Encounters with BLM protestors have on occasion had some violent interactions with law enforcement. However, it must be stated that most of those incidents were incited and provoked by law enforcement, not protestors. NONE of those encounters were planned, organized, equipped and determined to cause or create violence as a means to an end.

Growing a diverse donor base