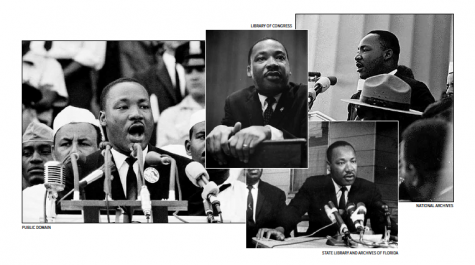 The Rev. Martin Luther King Jr.’s words continue to inspire more than 50 years after his death. Here are some notable quotes from King from The King Center.

“I know this whole experience is very difficult for you to adjust to, especially in your condition of pregnancy, but as I said to you yesterday this is the cross that we must bear for the freedom of our people.”

— letter from King to Coretta Scott King from prison in Reidsville, Georgia, Oct. 1, 1960.

“Your courageous action today reveals not only your commitment to a campaign promise but also to the principles of justice and freedom so basic to our democratic heritage.”

— telegram from King to President John F. Kennedy upon the Nov. 20, 1962, issuance of Executive Order 11063, which mandated an end to housing discrimination.

“We are caught in an inescapable network of mutuality, tied in a single garment of destiny. Whatever affects one directly, affects all indirectly.”

“God never intended for one group of people to live in superfluous inordinate wealth, while others live in abject deadening poverty.”

“With this faith we will be able to transform the jangling discords of our nation into a beautiful symphony of brotherhood.”

“This tortuous road which has led from Montgomery, Alabama, to Oslo bears witness to this truth. This is a road over which millions of Negroes are traveling to find a new sense of dignity. This same road has opened for all Americans a new era of progress and hope. It has led to a new civil rights bill, and it will, I am convinced, be widened and lengthened into a super highway of justice as Negro and white men in increasing numbers create alliances to overcome their common problems.”
— Nobel Prize Acceptance Speech, Dec. 10, 1964

“Without hard work, time itself becomes an ally of the primitive forces of social stagnation. So we must help time and realize that the time is always ripe to do right.”

“What, then, can I say to the Vietcong, or to Castro, or to Mao as a faithful minister to Jesus Christ? Can I threaten them with death, or must I not share with them my life?”

“All men are brothers because they are children of a common father.”
— The Drum Major Instinct, Feb. 4, 1968

VSU students return to campus for on-campus living and learning

Lead us to Unity: A Plea to America’s...